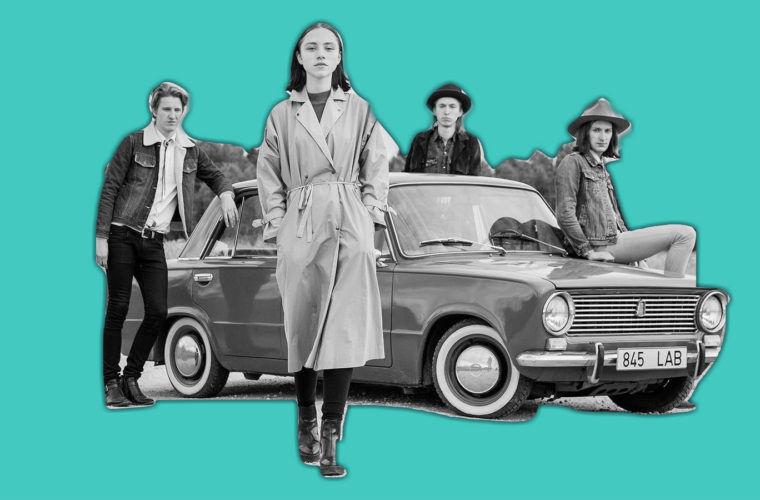 Exterior, night: You drive along a deserted highway, midnight, only the moon and the oppressive heat to keep you company.

Estonia’s Holy Motors released their debut LP, Slow Sundown, in February, and it’s sure to be a favorite of insomniacs everywhere. The slow-burn, shoegaze music employs plenty of reverb to form the soundtrack of a life that takes place anywhere, and nowhere.

The album’s first single, “Honeymooning,” sets the stage for this Mazzy Star-like dreamscape. The slow jam fills the car as you roll through the highway while singer Eliann Tulve evokes both love and loneliness. The Estonian five-piece also includes three guitarists (Raus, Hendrik Tammjärv, and Gert Guttmanand) a drummer Kaspar Kiinvald, and they forge a tense atmosphere that keeps the pace.

Holy Motors hails from Tallinn, Estonia, home to some of the shortest days on the planet. The experience of coldness and darkness comes through on the compulsively-listenable album. The group burst onto the scene with a song, “Descending,” that felt like the Eastern version of Chris Isaak. The song and the 7-inch, Sleeprydyr, got the music world’s attention. Now, just one year later, the band has released their best musical statement to date.

The new album is at once unsettling and deeply resonant. Some of the attention to detail is due to Merchandise’s Carson Cox, who produced the album. After a brief meeting at a festival several years ago, Cox contacted the band again to get the ball rolling for a seven-inch, as well as connect Holy Motors with their label Wharf Cat.

That Holy Motors is so cinematic is no accident. Their name was taken from the Leos Carax movie of the same name from 2012. Carax is known for his poetic and despairing depictions of love. The French director created a spellbinding and challenging movie about an actor who seems to inhabit many roles without ever being filmed by cameras. The surrealist take on life suited the five members of Holy Motors, who explained to Music Map that they were also influenced by the works of Aki Kaurismaki, Jim Jarmusch and David Lynch.

The band is not pure shoegaze – dark psychadelia keeps the music interesting, while the occasional twanging guitar gives the music a whiff of country. About that: listening to the album, it’s easy to reach for the term “country” to identify the feeling below the reverb, but really the band is harkening back to a much earlier vision of country music, when it was called country-western, or what we now call Americana. It’s easy to envision a countrified David Lynch movie set to the country-influenced song “Valley”: “I am alone in the valley / Looking for a girl I’d like to marry.”

Perhaps the easiest references for music lovers are Cowboy Junkies, Mazzy Star, Chris Isaak, and Low, as interpreted by tiny Estonia, the republic that won its independence through a protest movement inspired by song. If you listen to the album enough, you might be convinced you are at the edge of the end of the world, and that’s okay.