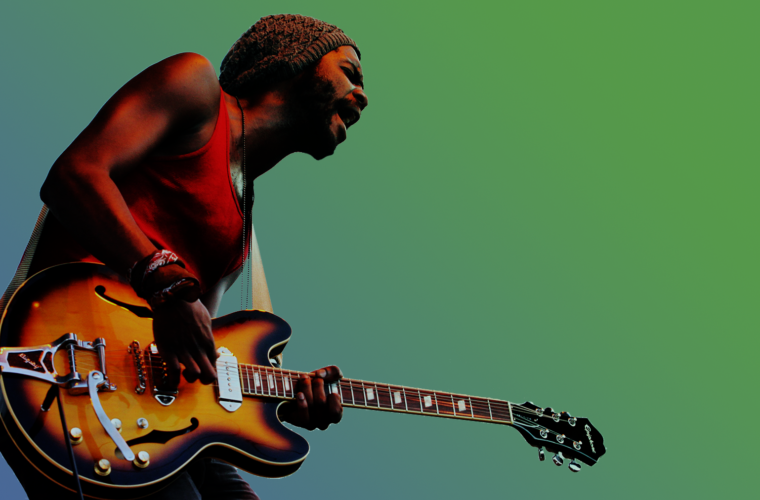 The blues revival is trucking along, thanks to award-winning guitarist and vocalist Gary Clark Jr. and breakout star Leon Bridges. Clark paved the way for other artists who are heavily influenced by blues and R&B. 2017 has been a busy but fun year for Clark, as he indulged a favorite passion from childhood and got to collaborate with musicians as diverse as Junkie XL, ZZ Ward, Leon Bridges and John Baptiste. He’s been in heavy radio rotation since October on his cover of The Beatles’ “Come Together,” which he recorded for DC’s Justice League, which is out to radio in advance of the movie’s November opening. Now Clark is being heard on PBS, thanks to a cover of Crosby Stills & Young’s “Ohio.”

DC got in touch with Clark when Junkie XL had the idea of producing a version of “Come Together” to promote the first Justice League film. Clark and XL gelled during the recording. “I showed up in the studio in L.A., and we sat down and got the vibe, and he played me the track and I was blown away by it — just the sounds this guy came up with. And he said, ‘Y’know that buzzy guitar thing that you? Just do that and sing the hell out of it.’ So that’s what I did, and it really flowed. We just kind of spoke the same language without really saying anything.”

Clark was amped be a part of the movie, since Batman was his favorite superhero. Clark remembers using his mother’s black robe as a cape, running around the neighborhood telling everyone he was the caped crusader. He even tried to jump off a building; thankfully, his feet hit the ground unscathed. “Come Together” will be released on the movie soundtrack in November. For now, it’s charting a #22 on the Billboard Mainstream Singles Chart.

Another collaboration held deep meaning for Clark: he joined John Baptiste and Leon Bridges for a harrowing rendition of “Ohio” for Ken Burns’ new documentary on Vietnam. The anguished recording recaptures the moment when four Kent State students were murdered while protesting the Vietnam War. The single has new meaning in 2017, as America continues to be rocked by police violence and protests against it.

Clark also collaborated with ZZ Ward for the song “Ride” for Cars 3. Clark enjoys branching out from his usual routine, finding new music and new collaborators. The collaborations were just what the doctor ordered for Clark as he prepares to release his fourth studio album in 2018. Although Clark is keeping the details under wraps, he noted that the political climate is very different than what was happening when he released his last album in 2015.

“There’s real stuff happening right now. It’s not all rainbows and unicorns at the moment, so that’s what the record’s gonna be about. I think you’ve got to get out of your comfort zone, y’know? I don’t think it’s time to play safe anymore.”

Clark also shared some memories of Tom Petty, who called Clark to open for him in Austin. Petty asked Clark to get on the stage and sing during the Heartbreakers’ performance, which he was reluctant to do. “He’s like, ‘Yeah, you’re gonna come up here. You’re gonna sing with me too,’ and I’m like, ‘No, I’m gonna hold back. It’s your thing, man. People want to hear you sing it,” Clark said.
But during the song, Petty put him on the spot and stopped singing, looking at Clark to jump in. “It’s like, ‘It’s not the time to hold back or be shy. You got an opportunity, you gotta go and make the most of it and get your shine on and get your light on.’ That’s what I felt he was telling me without saying anything. So I took that as a lesson that, ‘Man, when it’s your turn to go, you give 135 percent and don’t hold back, don’t be apologetic.’ That really meant a lot to me.”