For the First Time Since Their T.J. Holmes Affair, Amy Robach Was Spotted With Her Ex-Husband, Andrew Shue: 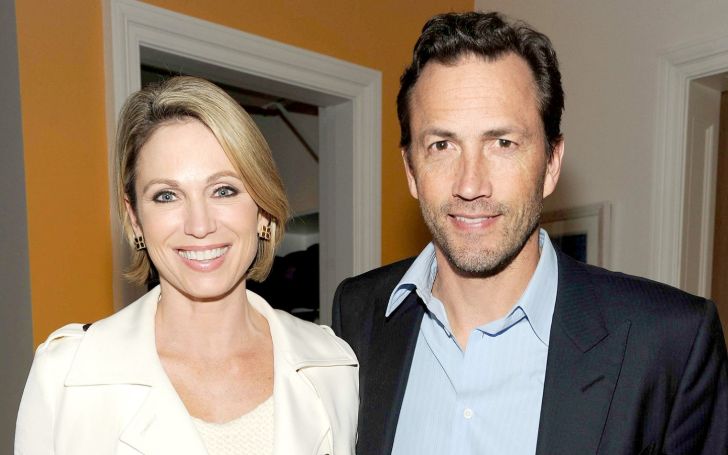 For the first time since rumors of her affair with GMA co-host T.J. Holmes began circulating, Amy Robach was spotted with her husband, Andrew Shue. The suspended GMA anchor appeared to meet her ex on a New York City sidewalk on Friday to exchange the family dog, as shown in the images.

On a New York City sidewalk, Robach, in a brown coat, trousers, and brown boots, and Shue, 55, an actor, clutched onto the dog they had shared as a couple. During their Friday encounter, the two of them spoke from separate locations.

The images are the first public sighting of Robach and Shue since the revelation of Robach’s affair with Holmes surfaced. They arrive just days after E.T. revealed that Robach and Holmes had retained legal counsel in the face of an internal investigation into their workplace romance by ABC.

A source informed E.T. that both GMA3 co-anchors have hired attorneys “since there is an ongoing investigation, and that’s what you do when something occurs.” Despite this, both co-anchors are still employed by ABC. Robach, 49, and Holmes, 45, “haven’t broken any corporate norms,” as stated by ABC News president Kim Godwin.

However, the same source stressed that “there is still a chance they will not return to GMA3.” Further, the insider speculated, “the longer this process goes, the more likely they won’t return to” their former roles.

A source told E.T. that it needed to clarify whether they would return to their previous roles at the network.

Godwin informed ABC News employees in a memo dated December 12 that the co-anchors would be off the air for the duration of an internal probe.

“Today, as we begin a new week together, I’d want to talk briefly about the situation with GMA3’s T.J. Holmes and Amy Robach. I realize the nonstop coverage might be a diversion from the vital efforts of the ABC News staff “letter’s opening. “There will be a rotation of anchors at GMA3 while Amy and T.J. stay off-air pending the results of an internal review. Please know how incredibly proud I am of your hard work and professionalism and that I sincerely desire that we continue to put our efforts where they are most fruitful: in doing what we do best.”

When images of Holmes and Robach kissing and holding hands appeared in November, word quickly spread about their blossoming romance. Being still married at the time just fueled speculation surrounding their relationship. Later, ET was told by a source that the co-anchors had divorced that summer.

Both have been married since 2010; Robach to Shue and Holmes to attorney Marilee Fiebig. Both had recently divorced before the public revelation of their romance; sources said E.T. It was in October when Robach’s Instagram images ceased showing her with her wedding band. A source informed E.T. that Holmes and Robach have been “going out in secret for quite some time,” although the news of their romance has surprised many.

The co-anchors returned to their GMA3 program the day after making headlines, and Holmes appeared to make a joke about it.

“It’s a shame it’s almost the weekend since this week has been fantastic. What I want is for this to carry on forever. Have fun with it, “His remark was a clever aside.

Robach warned Holmes with a chuckle, “Do not rely on the words of others; speak only for yourself. As you can all relate, I’m immensely looking forward to the weekend. Around here, Fridays are much anticipated (by at least part of the staff).”

A source told E.T. that Godwin addressed the connection at an editorial meeting and that Holmes and Robach, who had sat next to one other at the anchor desk every weekday since 2020, were initially briefly removed from the air.

They disappeared from public view after that, but subsequent weeks saw Holmes and Robach enjoying the holidays together, proving they are still very much together. Holmes has also requested separation from Fiebig.